Women in the capitalist society lose their sense of being a human being and they become possessions when they are used in advertisements. Capitalism is the economic system in which natural resources and the means of production of goods and services are privately owned. The means of production are more efficient tools that replace human labour that gives the private owners more of a capitalist control. This control gives the private owners a sense of authority, which is power that is legitimated or institutionalized. A way the private owners maintain their authority is through the consumption of products and advertisements that include beautiful women.  Women are used in advertisements because they are always being watched even when they are alone. John Berger (1973) mentioned in his book and television series, ‘The Way of Seeing’ that women are dreamt of by both men and themselves. This very fact is the key to advertisements because advertisements do not sell the products, rather the dream, glamour and prestige that come when you consume the product. Another fact that women are used in advertisements is because they are constantly being looked at by others, and they look at themselves through mirrors. Women view their reflection to see if they look presentable all the time. John Berger stated that the mirror was often used as a symbol of vanity for women, yet the photographer takes the picture, or the artist paints the picture for their own pleasure and then condemns women. Women in advertisements are portrayed in a way, where they possess the dream, glamour and prestige the advertisements sell; however, the fact about these advertisements is that women are another one of the possessions in the advertisements.

An example of an advertisement that as Jennifer Brayton describes uses women as nameless sexual objects even when she is naked is the picture above. By naked, I don’t mean all her clothes are off, but I am taking the perspective of John Berger that makes absolute sense. The term naked in this sense is to be yourself, meaning you have life and you are human. You have a sense of agency unlike the contrary, the nude, where you are dehumanized, you have no agency, and you are positioned as an object. Most importantly, you always wait for the spectator or owner. Meaning that you have no focus in the setting your picture is taken, yet you are looking outside of the picture to look and pose in a way the owner or spectator can have a sense of connectivity when they look at your picture. This is the key to determining if the woman in the above advertisement is naked or nude. Before I made an analysis of whether she is naked or nude I must observe her surroundings. 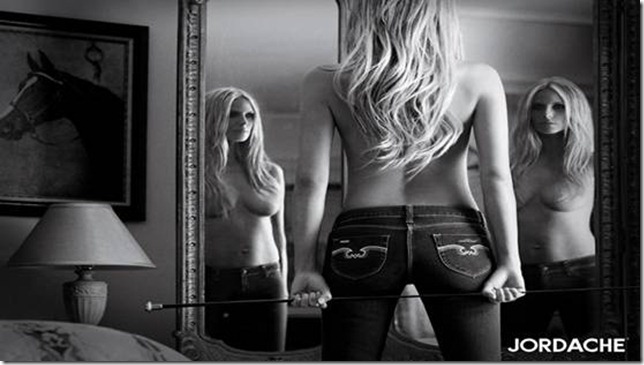 In this advertisement, we see her holding a whip in both hands that usually horse riders use. We can also see that there is a framed picture of a horse on the wall, so we can conclude that she is a horse rider or loves horse riding. The position of her whip is in both hands, but it rests on her butt, which is where the focus of the advertisement should be since it is an advertisement for jeans. The reason I say it is an advertisement for jeans because on the right corner of the advertisement spells Jordache, which is a clothing company know for their designer jeans that was popular in the 70s and 80s. That could explain the reason the picture is black and white because they are trying to sell the illusion that the jeans are still in fashion. Our focus should be on the denim itself; however, there are so elements to this advertisement. One major element that distracts us from the product the advertisement is trying to sell is the woman only wearing the jeans. She is beautiful in a sense that when some women look at her they will envy her body and when some men look at they will see what a beautiful women should portray. This woman is looking at herself in what seems to be a golden framed mirror. When an object is framed in gold it holds a sense of prestige and glamour. This is a key element for a successful advertisement to sell prestige and glamour that the product being sold will bring you.

What the woman in the advertisement is doing is starring at herself in the mirror only wearing jeans. She is naked because it seems she is not aware of a spectator thus she is being herself. However, I see it, otherwise her eyes are darkened with make up so that if you look in the right reflection of the woman in the advertisement you would think she is nude because she know you the spectator are looking. Other elements that lead to her being nude is that she has no sense of agency, she is just starring aimlessly at her shirtless body and she is standing in a manner where her body is objectified. It is objectified because she is showing her breasts and butt which in a sense dehumanizes her because it tells the spectator buy these jeans and you can have my body or you can have a girl with my body stand aimlessly for your pleasure.