Community Forum on Responding to Changes to Immigration Policy

On November 15, 2013, BWSS organized a community forum to discuss responses to changes in immigration policy and ways to improve service delivery in collaboration with the Migrant Mothers Project and YWCA Metro Vancouver. We came together with 55 people including educators, front-line workers, management and volunteers who work in the areas of immigration and refugee settlement, immigration law, child protection/children’s aid, health care services, adult education, anti-violence against women services and community development.

Following the forum Rosa Elena Arteaga wrote Community Forum on Responding to Changes to Immigration Policy: Supporting Non-Status, Refugee and Immigrant Women Survivors of Gender Violence blog to share our knowledge and analysis on the discussed topics. Today, we are pleased to share a summary of the Forum to respond your requests for hearing more about the discussion and to share our knowledge to improve service delivery in our community.

Please read the Forum Summary, prepared by the Migrant Mother Project. You may download the document here.

Many topics emerged at the Vancouver Forum which commenced with acknowledgement that we are on Unceded Indigenous land belonging to the Coast Salish peoples, including the territories of Musqueam, Squamish, and Tsleil-Waututh Nations. Throughout the forum, the connections between colonialism, global capitalism, and migration were integrated with analysis of the marginalization of women living with precarious immigration status in Canada. Here we expand upon some of the core themes that were raised at the Vancouver forum.

The Forum commenced with an opening ceremony led by Brandy Kane (Thunder Eagle Woman) who gave recognition to the traditional lands where the forum took place and led us in singing the Wonder Warrior song. Angela Marie MacDougall, Executive Director at BWSS added to the introduction and noted that the significance of the Women Warrior Song and the central role that Indigenous women are playing as leaders in anti-Violence Against Women work in Vancouver. It was evident that the women’s movement in Vancouver is committed to Indigenous sovereignty and recognizes the suffering of Mother Earth as inseparable to anti-violence work. This was further reinforced through linking the aboriginal plight of disputed lands in Canada, but also worldwide, to circumstances that lead to forced migration and oppression faced by immigrant women who are denied citizenship in Canada. 2. Globalization and the Live-in-Caregiver Program

Linkages between global capitalism, the displacement of people worldwide, and gendered migration to Canada were especially pronounced in the Vancouver forum. It was noted that globalization and corporate culture have a transnational influence on government policies that result in environmental degradation, human displacement and cultural genocide. Live-in-caregivers were discussed as a group of women that represent a major source of income for the Philippines, but who must endure economic insecurity, forced cohabitation with their employers and family separation for several years. Through a series of case studies, forum presenters illustrated the layers of women face as live-in-caregivers and through their efforts to establish permanency in Canada and reunify with their families. The Vancouver forum attendees were congiscent of the tragedies unfolding in the aftermath of typhoon Hainan, which in part contributed to heightened awareness of the structural violence associated with migration and global inequalities.

In Vancouver, the Mothers without Legal Status Project, YWCA Metro Vancouver, began their research investigating the growing concerns for mothers without legal Canadian status and who have Canadian born children. Over five years of advocacy efforts, critical communication tactics and working with various ministries at the provincial level gave this group sufficient leverage to change certain policies in the Vancouver region including: 1) having children attend school without international student fees 2) allowing a mother to access British Colombia housing while waiting for permanent residency, and 3) providing social assistance to single parents without status who are fleeing abuse The importance of these changes were echoed by other forum attendees that noted the positive impact that these changes have had on women attempting to access services, especially within the shelter system. Moreover, the YWCA wishes to continue their advocacy efforts with other YWCA’s nationwide in order to make this a Federal campaign.

The Vancouver Forum provided a space for attendees to discuss strategies around supporting women with precarious immigration status in Vancouver, but also to consider ways to develop networks with allies across the province and Canada-wide. The YWCA Metro Vancouver has been reaching out to YWCAs across Canada to explore the potential to expand their campaign for Mothers without Status to a federal level. There was a large desire to rally public awareness on this concern and doing so through sharing of women’s narratives, especially through social media and public awareness campaigns. In particular, the attendees noted the need to hold more events to raise consciousness on this topic in Vancouver.

The Vancouver forum created a space to discuss precarious immigration status, within a larger context of colonialism, globalization and subsequently forced migration. It is these factors that continue to impact and create links between Mother Earth, Indigenous sovereignty, as well as women with precarious immigration status seeking safety in Canada. Women’s experiences and resilience were honoured and shared amongst the group, which gave us a glimpse into the lives of the women that are caught in the middle of such global forces.

Service providers in the Vancouver area have been generating strong networks and are committed and able to discuss the injustices that are faced by their clients with precarious immigration status. Forum attendees highlighted the potential for networks amongst service providers to influence policy change at the local and provincial level.. However, additional efforts to mobilize networks that are able to engage media and policy makers to influence ministries at the provincial level and subsequently the federal level are critically needed. There was a strong sentiment of continuing to connect with one another in order to push for fair and equal policies for women, as well as their families, with precarious immigration status.

Within the anti-violence movement in Vancouver, there is an understanding that violence is significantly felt by women with precarious immigration status and that there is a need to prevent this violence from occurring by challenging and shifting unjust practices. Although more work remains to be done, the forum in Vancouver was an inspiring example of how to service providers, immigrant women and Indigenous leaders can work together to support women whose full humanity remains unrecognized in Canada.

On November 15th 2013, Battered Women’s Support Services hosted a Community Forum on Responding to Changes to Immigration Policy, in partnership with The Migrant Mothers Project and YWCA Metro Vancouver. Over 50 front-line workers, counsellors, settlement workers, and community activists came together to learn and share knowledge. We reinforced our commitment to continue our collaboration and to increase our networks so we can affect change and attend to the inequalities that migrant women face within Canada’s economic, social, legal and political systems. Inequalities that, more than often, deny basic rights to migrant women and their families. Read full article… 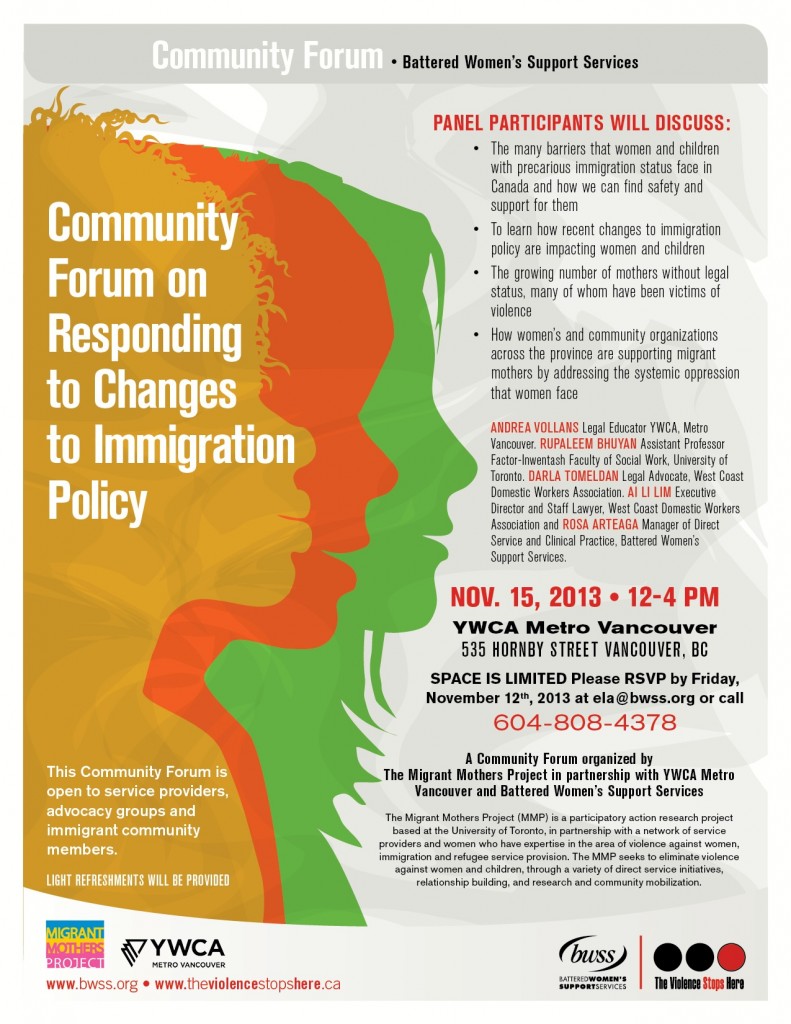 Battered Women’s Support Services responded to over 10,000 crisis calls from women and girls to get help and end violence in 2012. We could not provide this essential support without your contribution.

← Prevention of Violence against Women: Everyone has a role… BWSS Indigenous Women’s Program →